The polarized church part 12: group study and the spectrum

The dynamic of group study is one that is widely used and endorsed by not only the church, but schools and business as well. We may call them by a myriad of flashy names to sell them, but in the end they are all functionally the same. It's a widely held belief that there is power in the group dynamic, and it's the most efficient way of producing and relaying information. However, the research done on the subject has not supported this idea at all. In fact, all the data seems to indicate that this is the most inefficient methods available. One study in particular that was initially done to try to prove the virtues of the group dynamic, ended up discovering the three main culprits that make groups ineffective.

Social loafing - Any group dynamic is only a big as the number of participants. There always seem to be a few who are content to listen and not contribute. Often, these are introverts who feel overwhelmed by the high level of stimulus that groups provide. Yet, it can be an extrovert who doesn't feel that they can compete at the subject at hand. Which is what all these efficiency killers come down to, the competitive nature of groups. Extroverts  tend to naturally have that nature, and gravitate towards competitive environments because of it.  Where introverts tend to be non-confrontational. Which is why extroverts have the edge over introverts when it comes to group study. Which is the other half of the extrovert disadvantage in study I have mentioned. The method best suited to them is least efficient.

Production blocking - There always seems to be at least one person in the group who wants to dominate the conversation. Again, a group's dynamic is only as big as the number of active participants. A production blocker keeps that number low. This is often an extrovert being their natural selves. They also have a tendency to get off the subject at hand to direct the subject towards something they can better compete in. Introverts can be guilty of production blocking on occasion too. If the subject at hand is something they are well versed in, and there are no dominants to get in their way. They may seize the opportunity to show that they are not as stupid as extroverts accuse them of being.

Evaluation apprehension - This is simply the fear of being judged harshly for what you say. Then spoiling the group dynamic by giving into that fear. Which can be anybody, who feels they cannot compete in one way or another.

As someone who has participated in and facilitated many small groups, it was easy to see the truth of these efficiency killers. I've observed them all for myself. But for the church, it shouldn't be true. For those who follow the Bible and the Holy Spirit we really should know better. We should realize that groups should be a collaborative one, not a competitive one. That they are there for well informed to share what they know with the less informed; not offer a venue to show off. The fact that it is true is a symptom of a really huge problem that the church needs to address. However, it’s a problem that even the first generation church had to deal with as well. (1 Corinthians 14:26-40)

Finally, try to remember that as far as the church is concerned, groups are just as much about fellowship as they are learning. So it’s okay if they are not all that efficient in education. But, if they turn competitive, they are not functioning well in that sense either.

Posted by The Visual PARABLEist at 6:02 AM No comments:

The polarized church part 11: Private individual study and the spectrum

The next method of teaching we will be looking at is private study. It's a method endorsed by churches and schools alike. As it turns out, for a very good reason. I say this because most every research study ever done on teaching methods, have come to the same conclusion. Those who learn the most, are the ones who engage in the most private study. Despite all the millions of dollars being spent on building churches and schools. It's what we do at home that matters most. Which means the biggest part of the responsibility of education lies in the hand of the student. This idea applies to sports and music as well. Those who go far in said fields, are the ones who spend the most time in private practice; not just group practice. Group study and practice may have it’s place, but private study and practice should have a more predominate place.

This is where part of the extrovert disadvantage in learning comes in. With private study being the lowest stimulus level method there is, extroverts naturally have a much harder time making the most efficient learning method work for them. However, there is one way that I know of to get the level of stimulus up so extroverts can concentrate. That would be to turn on the radio. I know it may sound counterintuitive, but it's absolutely true. I'm sure there are parents all across this nation yelling at their kids to turn off all the noise while they are studying, thinking they are doing a sensible thing. But I'm telling you that if your kids are extroverts, you are actually crippling their concentration. They may not do as well as a focused introvert in silence. However, they will do far better with the radio than forcing them to study like the introverts they are not.

Introverts on the other hand often thrive here. Private study is the ideal place for them to go to work. They may even enjoy the peace of mind that such singular focus gives them. You probably remember back in school there was this one kid who knew all the answers. It's not necessarily because they were that much smarter than everyone else. In many cases that kid was probably an introvert who enjoyed study, and was simply able to get the most out of their intelligence via private study.


Posted by The Visual PARABLEist at 5:21 AM No comments:

The polarized church part 10: Lecture and the spectrum

The first primary method for teaching we will be looking at is lecture. While churches may call them sermons or messages, when you get down to it they are just lectures. Which often has a negative stigma attached to it in this extroverted culture. For a very good reason too, I say this because lecture does not cater to the extrovert’s needs very well at all. They often find it hard to sit through or get much out of lectures with it being a low stimulus level method of teaching. With lecture being such a staple of the "traditional" church, extroverts often find such churches unpleasant.

Introverts on the other hand often do quite well with lecture. As long as there are no bored extroverts causing disruption, or speakers who like to yell to fire up the crowd, introverts find the singular focus of lecture favorable; the greater depth the better.

When extroverts are found at lectures, they often do best when the speaker shouts or uses lots of multimedia. While this can be distracting to the most introverted, extroverts would do well to seek out teachers who use such methods. It can go a long way towards maintaining their full attention.

Extroverts often congregate towards the back outside the prying eyes of the speaker. Where they can divide their attention between the speaker and one another as an unconscious attempt to keep the stimulus up; often to the nuisance of introverts.

However, there is another less intrusive way of getting the extrovert’s stimulus level up. That would be doodling. One time I even heard a doodler say “I know it looks like I’m not paying attention, but I just can’t focus without doing this.”

Already, it should be clear how a one sized fits all approach to learning will not produce equal results.

Posted by The Visual PARABLEist at 4:45 AM No comments:

The polarized church part 9: how the spectrum affects the way we learn

Where we land on the introvert/extrovert spectrum can affect our lives in many ways. One of those ways that is of great concern to the church is learning. While there are many factors that play into how we learn, where we land on this spectrum brings a rather obvious and noteworthy variable that we would do well to consider when educating ourselves. Most of it comes down to one thing. Something known as the stimulus sweet spot. The basic premise of this is that individual brains have a specific level of stimulus that we function most efficiently at. Get too far away from it and we will struggle to concentrate. If you are an introvert, that stimulus level is probably on the low side. Introverts prefer to focus on one thing with minimal distraction, for excess external stimuli can easily overwhelm them. However, the extrovert brain requires a much higher level of stimulation. If the one thing they need to be focusing on in itself is not stimulating enough, they will encounter a cabin fever like reaction and their minds will drift off topic out of Boredom.  There are many different methods of teaching, and each one comes with its own unique level of stimulus. For the purpose of this blog we will focus on the four broad categories used by the church. 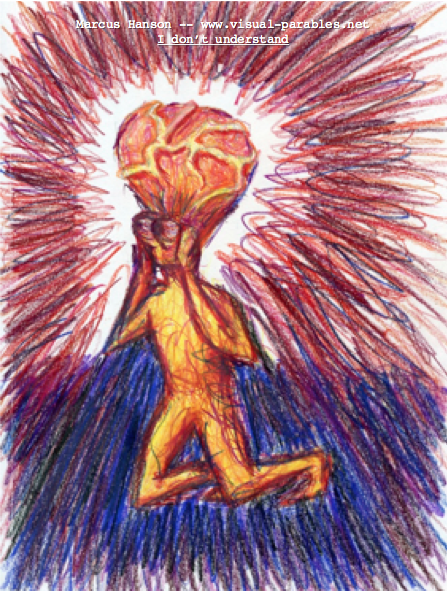 Posted by The Visual PARABLEist at 6:25 AM No comments:

The other day I came across a link via social media to a blog entry called head worship vs heart worship. In many ways, this was saying the same thing that I have been saying via this series on the polarized church. The traditional introvert skewed church being more of a head worship experience. Where the contemporary extrovert skewed church is more about heart worship. My ultimate point being that we often choose the one that is the most comfortable to our personalities, and disregard the other half.  Despite the fact, that there is room, and need for both in worship. That we should look to one another to expand our horizons, not alienate others by making it all about us; hence the polarization. Which is one of the things that fragments the church rather than bringing unity to our diversity. It is not about one or the other, but it is about bringing both sides together.

Deuteronomy 11:18 - Fix these words of mine in your hearts and minds; tie them as symbols on your hands and bind them on your foreheads.

Jeremiah 11:20 - But you, Lord Almighty, who judge righteously and test the heart and mind, let me see your vengeance on them, for to you I have committed my cause.

Hebrews 8:10 - This is the covenant I will establish with the people of Israel after that time, declares the Lord. I will put my laws in their minds and write them on their hearts. I will be their God, and they will be my people.

Posted by The Visual PARABLEist at 7:40 AM No comments: