I don't think anybody would doubt that we live in troubled times. For the church, it has led us to point many fingers of blame at the world. Yet maybe, the world is the way it is, is caused by the church not doing its job as it should. Have we repeated all the same mistakes that Pharisees of Christ's time did? Has our weak faith failed to delight and inspire the outside world? Have we lead more by definition than example? Have we imparted knowledge, but not necessarily understanding? Have we portrayed the "good news" very negatively?

While the reasons for this possibility are numerous and diverse, I want to take a closer look at one thing specifically; that being wholeness. As I indicated in my Three-dimensional holiness post, our lack of wholeness often prevents us from succeeding in the moral side of holiness. As well as lead us to seek acceptance, approval, and affirmation from the world, instead of being "set apart" from it; as holiness requires. Also, as I indicated in my Cart before the horse video, by leading with the moral side of holiness, instead of viewing it as the destination, we are setting ourselves up for failure.

So I think it is time that we take a long hard look at this concept of wholeness. It is apparently a very foundational truth that has been tragically neglected, which shows in our lack of fruitfulness. Once the church gets themselves into a better place, we should be better equipped to disciple the world as Christ did, instead of as the Pharisees did.

Maybe this is what I have been working towards all along. My recent series on the heart surely fits, as well as my State of Shalom post way back in 2014. As well as countless others. Time to bring all my efforts together.

This is way too big a concept to cover in a single post. But one must start somewhere. I can't honestly even say where it's all going right now. All I can say for sure is I need to take this journey. Will you be joining me in it?
The Visual PARABLEist 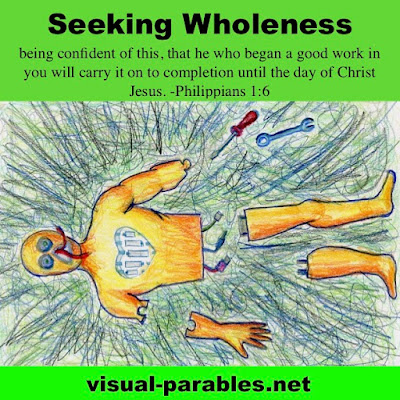 Posted by The Visual PARABLEist at 5:30 PM No comments: