Wholeness: The Season of Resurrection?

As I type this, we are in the season of Lent. Even if you are part of a church that does not embrace Lent fully, you may still observe Holy Week, or at least Good Friday. A time where the cross is put even more front and center than normal. We spend 364 days of the year around the cross, but only dedicate one day to the resurrection come Easer Sunday. As I have already indicated often, this seems a little backward to me. So I thought I would share my thoughts on the emphasis of a symbol of death, albeit in a watered-down way, instead of a promise of new life.

Ever play one of those match-three games? Every level has a goal, but there are often obstacles to that goal as well. Sometimes we can get so fixated on removing the obstacles, that we forget about the goal. But, we don't realize it until we fail miserably at that level. It can be the same with working out our salvation. We get so fixated on dealing with the obstacle of sin, we lose sight of why we are doing this. The church could surely help out with this by putting more emphasis on the good news of the resurrection.

We like our symbols since they serve as easy to understand reminders. Which is Biblical. (Numbers 15:37-41) There are few more iconic than the cross after all. I have put much thought into symbolizing the resurrection to make it equally iconic. However, this saying reminded me there is one already. "Every flower of springtime holds the promise of the resurrection." There is a reason why Easter happens when it does. When the church was reaching out to the pagan tribes of Europe, they would draw parallels between their spring festivals and the resurrection to help them understand the gospel.
Imagine if a church painted lilies behind the altar instead of the traditional cross. As opposed to just bringing them out seasonally. A symbol of life, not just death. We could even do multiple kinds of lilies to add an element of unity in diversity to it. 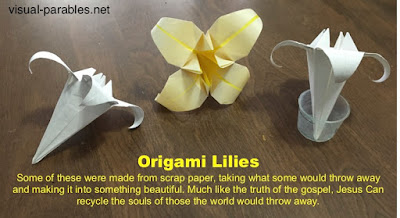 Even in my artwork, there is a recurring symbol of the flower, which is a combination of a rose and a tulip. Which represents the things we are waiting to bloom in our life. Is this not the essence of seeking wholeness, or the resurrected life? 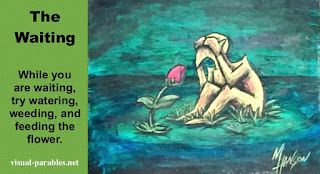 There is a saying "progress, not perfection." While there is definitely a valid truth in that. I sometimes think we let this idea lead us onto a halfhearted effort when it comes to wholeness, salvation, and the resurrected life. Hence, the average Christian playing ring around the cross for forever and a day; only experiencing the resurrected life for fleeting moments. We should seek better if we want our churches to expand because growth starts from within. It's the "whole" individuals who delight and inspire the most people with their everyday lives. Not the loveless broken-hearted legalists.

Jesus told us to take up our cross and follow him, but follow him where? The same place it led him, the tomb that leads to the resurrected life. So eventually, we need to step into the tomb and let the old self die already. Then shed off our burial clothes and step out of the tomb to embrace the recreated life. Then, we will naturally want to become participants in the kingdom of God as fully adults heirs. Not just as an immature observer. That won't happen if we are too in love with the ways of the world, and settling for our brokenness. 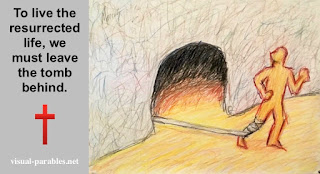 I want to know Christ—yes, to know the power of his resurrection and participation in his sufferings, becoming like him in his death, and so, somehow, attaining to the resurrection from the dead. -Philippians 3:10-11

Posted by The Visual PARABLEist at 5:57 PM