On the first day of the week, very early in the morning, the women took the spices they had prepared and went to the tomb. They found the stone rolled away from the tomb, but when they entered, they did not find the body of the Lord Jesus. While they were wondering about this, suddenly two men in clothes that gleamed like lightning stood beside them. In their fright the women bowed down with their faces to the ground, but the men said to them, “Why do you look for the living among the dead? He is not here; he has risen! Remember how he told you, while he was still with you in Galilee: -Luke 24:1-6

It would seem that faith has a big role in our wholeness, just like most everything else in our Christian walk. I would advise that you honestly ask yourself, do you believe your wholeness is a priority to God? As well as, do you doubt that you can be made whole again? If yes, then really consider the why behind it. Then have a heart to heart with God about this.

And without faith it is impossible to please God, because anyone who comes to him must believe that he exists and that he rewards those who earnestly seek him. -Hebrews 11:6

I also challenge you to specifically ask God, what does that mean for you? For some, you may have never even considered the concept of wholeness before now. For others, you may have very specific ideas about your wholeness. Especially if you have a physical ailment or limitation. Will you still have faith, if God defines it differently than you do? Will you still earnestly seek him, if God is more focused on your heart than your flesh? 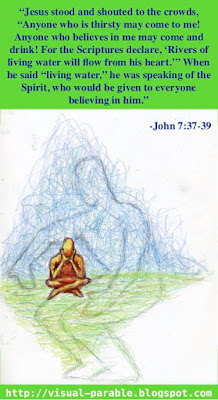 Posted by The Visual PARABLEist at 4:21 AM